Have you ever been so tired that it took ALL of your strength to keep your head upright? That’s kind of how I feel right now and I’m not sure why, but I am ready to crash for the night. But first, a post. Or some reasonable facsimile.

This morning, I woke up bright and early (actually, it wasn’t that bright) for boot camp. Class number 2 left my legs feeling like LEAD. There were a lot of squats and lunges involved and also this:

Do you remember these things from when you were little? 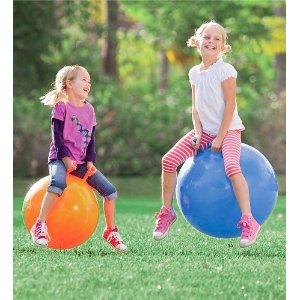 See, back in the Good ‘Ole Days, you’d hop all of your cares away on these giant, inflatable things in the backyard. Those were the days when your legs were spry and able to those kinds of frog-like things.

Now, imagine a bouncy ball about HALF that size and trying to hop across the ENTIRE LENGTH OF A GYM FLOOR (TWICE) on it, all before 9 am. Not a pretty sight, my friends. Not at all. I don’t think I’ll be able to walk tomorrow. Thanks, Sarg. (Katie and I also came very close to getting nicknames in class this morning, but after not coming up with anything right away, the instructor settled on “The New Girls”–creative, no?)

I’m actually not sure what this was about, but every time we did a lunge or squat, my quads were killing me! It felt like my legs were super tight and the top was almost tingling! Definitely not cool. Hopefully I just wasn’t fully warmed up. My sister always tells me that I don’t stretch enough, maybe she’s right about that. I very rarely stretch around my runs which is probably a very bad idea.

After boot camp, I headed over to the new gym (I signed up for this boot camp class before I was considering actually joining a gym, in case you were wondering what’s up with that.) I decided to become an official member which means that I’ll get all of the perks that are associated with full membership including extended access hours, unlimited courses and a free personal training session. I’m quite excited. I also scored a free water bottle, t-shirt and pear. What more could I have asked for?

After a cup of my favorite coffee and some scrambled eggs made with fresh spinach, it was time to head off to work which flew by pretty fast.

Nothing much else to report! I signed up for the personal training session this Monday so I will be sure to share that with you. I’ve done one other session before a couple of years ago at a gym that I joined just for the summer months. It was actually pretty fun and informative (even if the trainer did make frequent comments that I could never decide whether or not to be offended by. For example: “You probably don’t believe this, but larger hips in women are actually evolutionarily adaptive!” (Read: You have giant hips.) ) Hopefully this one will be a little less… blunt. 😛 I am definitely hoping to learn more about how to use the machines at the gym that I always run away from a little more efficiently. I suppose actually using them might be a good start.

There are also two group classes on Monday that I’m interested in trying out. So I’ll have to figure out which one I want to test out!

I think that’s all she wrote for tonight! Until tomorrow…